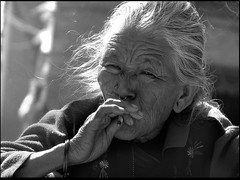 A couple days ago, the Lakers appeared a little vulnerable against the Magic after a game 3 loss.

It appeared that the Magic focused a little more and worked a little harder on fundamentals than the Lakers did, as a result, their shooting improved and nothing the Lakers and Kobe could do would stop them.

It doesn’t matter if you have a 46 inch vertical leap if you can’t make a layup or a free throw, much less play defense or make your way across the court without someone stealing the ball from you.

Small businesses have the same issues to deal with: Focus. Attention to fundamentals.

As I see businesses struggle with sales, customer retention, customer service and effective marketing, more often than not, ignoring lessons in fundamentals from old gray haired white guys are at the root of the problem.

No, it isn’t just white guys, but there just aren’t many business icons in their 70s and 80s who aren’t white, simply because of the way things were in the US 40-50-60 years ago. Naturally, there are exceptions, but this post isn’t about race relations so let’s get back to the topic at hand.

Experience is cheaper if you can learn its lessons from someone who already paid the price for it.

When I say old, of course I mean “much older than me” ( just like you do).

Yeah, I know. Those dudes are either really old or long gone. That’s just a short list of folks, but rather than go on, I have something else to deal with that’s far more important.

Your mind. See, I know what you’re thinking.

You’re 23 (or 33, 43, 53, take your pick), an entrepreneur and there’s nothing some crusty old white dude can teach you about business. This is the iPhone age, the internet age and those guys would freak out if they had access to what you have.

It’s a big mistake to think that way. Keep in mind that those generations didn’t have some of those things – so they invented them…

Simple but powerful – and easy to implement in your business. If you put some thought into it, you can easily find a way to leverage that idea so that it creates revenue opportunities for your business.

I’ll leave it to you to discover the other things these men taught but I can’t make a better suggestion to you than to discard your prejudices and just listen.

PS: Yeah, I realize the photo is of a woman. There are smart, old, white-haired women that you can learn from as well.

I always enjoyed listening to my grandpa. He was a great man, he taught me many things and I wish he was still around. Our society doesn’t value elders, I envy indigenous peoples, they value you family and simplicity. I think our elders hold the key to the future. We need to listen instead of talk. Some people talk to hear themselves talk, smart people talk when they have something to say. Regards!