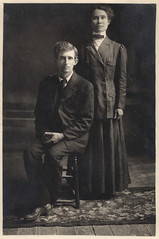 Last week I was talking with some friends about shooting weddings. Everyone in the conversation has a strong interest in photography, often concentrating on different subjects and all are at different stages in their photography life.

One of the guys mentioned that there was a nationwide event called “A Million Little Pictures” where small one-use cameras will be used all over the U.S. to document the summer of 2009. In September, the photos will be brought together to form a single exhibit in Atlanta and one other city.

During this conversation, I mentioned to the guy whose wedding photography business is taking off that he shouldn’t be surprised to find these on every table at a wedding. It’s been done for a good while, at least a decade, even now that digital has take over.

Someone else said a future wedding they will be attending is going to have digital point and shoot cameras on the tables with a central docking station to print small prints on photo paper embossed with the bride and groom’s name.

And then it came: Someone mentioned that another wedding photographer they know feels that is a direct attack on the professional photographer’s profits.

He doesn’t get it.

That was my comment about the other wedding photographer thinking point and shoots were cutting into their profits.

After some brief discussion, someone asked why I said that.

First, a couple of obvious reasons.

The wedding is about the bride and groom and their families, not the photographer.

The photography that comes from tabletop amateur one-use digital or film cameras is going to be at least a level of magnitude weaker than the quality of the shots the professional will produce. Different enough in quality that even an amateur will be able to see the difference.

This amateur photography will cover plenty of things that the photographer could miss. Not important stuff to the wedding party and the families, but fun for the guests.

At a wedding attended by 100 (much less 500) people, the photographer or photographers can only be so many places and most of that will be focused on their primary duty: making sure they get “those shots”.

You know, the shots that you have to have if you expect the mother of the bride to speak to you after the wedding day, much less place a big print order.

The mother and the families aren’t going to order 20″ x 30″ wall sized prints of their casual point and shoot shots. They might order an album of 4″ x 6″ copies of them, but so what? You’ve got formal portrait and album orders.

Focus on the high margin stuff.

Smarter than the average bear

Arguing with the bride’s family about these fun amateur photos is a great way to lose a client. Instead, be the only one who doesn’t make a fuss about these cameras, get the job and do it right. If you do, these casual, shot from the hip images can be the icing on the cake.

The thinking photographer can use these one-time cameras as another source of print and product sales by offering to simplify the post-wedding task of dealing with hundreds of photos – and print them using your print/order systems.

The primary photographer doesn’t need to spend hours editing these shots. Worst case if you feel the need to do that, it can be outsourced to an intern. Print orders of this nature can be offered via your online portrait store, automating the print process and making it easy for out of town guests to get the prints they want.

Photographers can take advantage of these amateur shots by offering to include them in unique products to purchase as part of their print order. Most of these print orders will be for small prints, so the quality from one shot cameras will be sufficient.

Photographers looking for an edge can provide the digital one-shot cameras to the wedding guests as part of a higher end wedding coverage package. Little things like a one-shot digital camera on every table can get you that coverage upsell. It doesn’t have to be logical to upgrade, it just has to be a big enough carrot.

A unique edge that a confident photographer will use with their branding on the cameras while their competitors complain about those same cameras “taking their profit”.

Offer a DVD of the images to every guest. Make the price whatever makes sense to you (or include it in your coverage package), but low enough that 100% of them take it. They just paid you to put them on your newsletter mailing list.

4 replies on “Don’t Shoot the Photographer”

Great post. I agree with you. having the guests help document the event is a great idea. As a photographer I can understand feeling threatened but you need to adapt to changing conditions not try and restrict people from adopting good ideas.

I like your suggestion about having guests help with the photographing. I did this at my wedding and the photos were much more candid and memorable than they would have otherwise been.

[…] Don’t Shoot the Photographer by Mark Riffey examines how to turn a perceived threat to your business income into an opportunity by focusing on customer service. […]