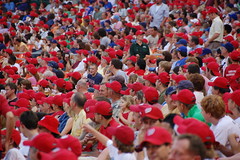 A couple of weeks back, there was a bit of a fuss about United Airlines kicking people off an overweight plane based on the fare they paid.

As the discussion (and the comments) run their course in this story, there were a number of suggestions on how to choose which passengers to remove in order to get the plane to flyable weight:

We could probably make a passable argument for each of these strategies, but we’d be looking in the wrong direction.

The problem is that each of these strategies are focused on the wrong thing: The airline and its weight problem (likewise the underlying failure to manage their business).

The right focus is that each customer bought a ticket with the audacious expectation that they would be transported somewhere at a specific (more or less) time..and they didn’t buy a ticket with Vegas odds printed on it.

I realize it might seem quaint or old-fashioned to expect that a customer-purchased ticket actually *means* something, so consider an alternative situation.

Imagine if you showed up at the Super Bowl (or worse, a LSU Tigers home football game) and found your seat taken. After a fruitless argument with the person in your seat, you find an usher and ask them to get this person moved only to have them tell you that your seat was sold to 3 other people and the guy sitting in it was the first of the 4 of you to arrive. You must leave the stadium. But don’t worry, we’ll let you watch the game later on TV, and for the same price.

Only in the airline business does this seem a normal, much less acceptable, way to treat customers.

Yes, I know there are regulations allowing them to overbook and treat people like a box at the UPS Store, but they aren’t *forced* to do so. They’ve make a conscious choice to treat their customers as if they were replaceable.

They’ve also made a conscious choice to design/run their systems such that at game time, they’re forced to make changes that negatively impact their customers rather than using those systems to assure that customers are never (or very rarely) impacted.

Far too often, the burden of these game time airline decisions fall on the customer who is not only blameless but unable to take any steps to prevent the problem, with the exception of avoiding travel altogether.

When sales and operations systems are tightly integrated, you’ll know in advance that the cargo booking Joe just sold will result in an overweight flight based on bookings already sold and current passenger and baggage weight trends.

When the choice is made not to create (or effectively use) systems like this, less-intelligent decisions get made and customers get treated like cattle. This isn’t the fault of Osama or the TSA, it’s a choice made by airlines and airports.

Imagine what would happen if an airline stated that “We will never overbook our clientele” and then delivered on that promise.

The right choice for you – just like with the airlines – is to implement automated systems that prevent things like this from occurring.

Take a look at your own business. Think about how your systems and business processes have gaps that cause problems that your customers are forced to deal with. What system changes can you make to prevent these things from happening?

In this competitive situation, would you rather be the airline that overbooks or the one that doesn’t? Â Which would you choose to fly with?