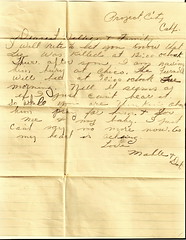 Yesterday, we started a discussion about the promotion of an event here in town.

Today, we’re going to talk about one of the mail pieces that went out to promote the Brunch.

That’s right. Every single one of those media were used to promote the event. While I didn’t use all of my arrows (with good reason), I did use just about everything in the quiver. Different types of media reach different people.

There are so many ways to consume news these days – you’d better be using every means possible to get the attention of your prospects.

Of course, you will be measuring the response from them, so you’ll know which are worth the expense IF there is an expense.

One of the most important mail pieces that went out was sent to business owners here in town (and a few in neighboring towns). I wanted to concentrate on our little town because the benefit is being received here. It makes for a tougher sale to folks from other towns unless you have a relationship with them. More on that later.

But will they open it?

The most important thing about the letter is making sure that the envelope gets opened.

In rural Montana, post office boxes are the norm rather than the exception. This holds true for residential and business addresses. People stand over the trash slots at the post office and sort their mail into 2 categories: trash and probably-not-trash. You probably do the same at home if you don’t get your mail at a PO Box.

Because of this, I used several strategies to make the envelope less likely to be tossed out:

Sweating the details inside the envelope

Inside, the letter was just one page long, printed on both sides. The letter was folded and inserted so that the front page would be seen first if the letter was opened traditionally (with the back facing the reader).

On the left side of the front page of the letter, all the board members are listed. Many are well-known in the community, thus establishing some credibility. The letter was personally addressed – not with a standard business lead in, but just with the person’s name. No business name. I’m writing to the individual.

The greeting is to the individual, not “Dear Sir” or “To whom it may (probably not) concern”. The latter two greetings aren’t even remotely personal. You want the reader to feel that you wrote the letter just for them, even if it is printed on a computer. That’s why…

The first line noted that I was only going to take 2 minutes of their time (yes, I timed it, it was just a hair over 2 minutes). I want them to know that this isn’t going to take long. I don’t want the letter set aside for later.

On many of them, I made a personal note at the bottom in that same green felt tip pen, usually to suggest an item for donation but sometimes just to make the letter more personal.

Remember, make it as easy as possible…

Just a little side note on the attention that is paid to the success of mail pieces: I received a letter promoting the Breakfast with Santa in Opelousas. It was closed with a 1.5″ long piece of scotch (ie:transparent) tape. I was curious if there was some testing behind the use of tape, so I asked my friend about it. It turned out to be a productivity issue. We laughed about the fact that we pay attention to silly things like that, but it illustrates the level of thought that has to go into every aspect of your marketing message.

In this case, we’re talking about a letter, but the same scrutiny is necessary for any other media.

Be sure that you’re putting this much care into the delivery of your message – and in fact, the message being sent by the delivery itself.

Tomorrow – how could this piece have been improved?

3 replies on “*The* most important thing about your letter”

In my experience running an event management company, and sending thousands of letters, the more you can personalize the envelope the more chance it will get read. Nobody likes mail from big impersonal businesses, and many of those mailings go straight to the round file, but the personal touches such as the ones you mentioned gets their attention and increases the open rate dramatically.

[…] week we talked about the direct mail letter that was used to secure donations of cash, in-kind items for the auction and to attract people to attend – as well as what could have been improved in the […]