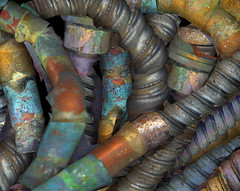 Drive around long enough and you’ll see a billboard that says “If you’re looking, it’s working”.

I see the same slogan on electronic advertising displays, which can be found everywhere from restaurant restrooms and gyms to billboards.

Is it “working” when you accidentally glance at the back of a plumber’s pants when he’s on his knees with his head buried under your sink? Or when you stare at an auto accident?

“My ad is working” means “people take action as a result of the ad”. It does not mean “someone with a heartbeat saw the ad”.

After you glance over at that auto accident, if you put on your seat belt…. that’s action. Cause and effect. Taking action.

That’s what “working” means when it comes to an ad.

“But, you can’t track billboard response”

I’ve yet to see a media whose usage cannot be tracked.

To be sure, you can’t track how many people read your ad on a billboard or in the newspaper, though you can estimate numbers based on drive-by traffic statistics published by governmental agencies (for billboards) and subscription + newsstand buys + online page views (for newspapers).

The number *reading* your ad isn’t the important number. Sure, if you have a general consumer product, you want to tell as many people as you can, but you don’t go to the bank with “eyeballs”, page views, newsstand copies or cars-per-day.

You go with sales revenue.

What you really want to be paying attention to is how many people took action as a result of your ad, no matter where it is.

You can absolutely track what happens if readers take action, but many businesses don’t. As a result, they’re operating on gut feel, guesswork or a seat of the pants idea of what their ads are doing.

Just because an ad or media is “free” doesn’t mean you shouldn’t be tracking results.