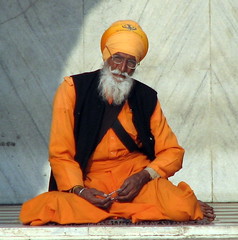 I’ve never been to one, but it sounded like it lasts several days and ends up resulting in 6000-10000 photos. Quite a celebration.

I suggested that if one really studied their ceremony, their beliefs and learned more about these things than anyone else in their large community, this photographer would really standout and as a result, dominate that business.

The end result would be to become the #1 expert in photographing Sikh weddings in that area, perhaps nationwide.

My friend said “Standing out is the new normal.”, in effect saying that everyone stands out in that business and that standing out is no big deal these days.

Maybe he’s right, but I haven’t seen that yet.

In other words, even in a room full of highly-successful people, 5% of them could kick the crap out of the others in business, tennis, mountain climbing or whatever they attempted.

Yet they’d all be billionaires.

To that end, Tom Peters’ site posted “Be irreplaceable” today – definitely worth a read.

1 reply on “In a room full of billionaires, the cream still rises.”

[…] off your cell phone. Yes, I said *turn it off*. I know you’re irreplaceable and all that, but trust them to be able to stay reasonably sane if they can’t reach you immediately for […]