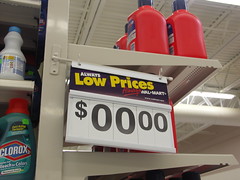 A lot of thoughts come to mind both ways about Wal-Mart‘s effect on local businesses and consumers.

No shortage of them are provoked byÂ this Forbes op/ed saying that the lack of access to Wal-Mart in NYC is actually a tax, and continues by stating that building a WalMart in NYC is economic stimulus.

For example, the author ignores the local sourcing that WalMart used to do during its “Buy American” phase. He also fails to discuss that when left enough time in a competitive market devoid of Wal-Mart,Â poorly run local businesses tend to fail anyway.

What do you think?

3 replies on “Is the lack of Wal-Mart actually a tax?”

I know that organized labor did arrange a protest to occur at the home of the developer of a new Walmart that was to be built in the NYC area recently. I guess that is due to Walmart being non-union.

The mayor of NYC should be investigating that activity in his own city instead of setting up scam purchases of firearms in Arizona.

Lack of Walmart being a tax? There’s definitely an opportunity cost at play there…

We don’t have Wal-Mart here in Australia but we do have Woolworth and Big-W.

When I lived in Canada, I enjoyed going to Wal-Mart because they offered prices that I could afford with a big variety of options. Something that was really disturbing to me though, is if a hairbrush is worth CAD$6 and the currency difference between CAD$ and the AUD$ at the time was around 25% ….the prices of goods was about the same. How can a hairbrush be worth CAD$6 and AUD$6? Perhaps its really a “Global” economy after all….