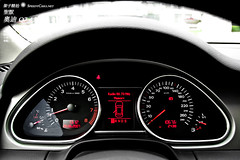 People often wet their fingertip and hold it up in a light breeze to see which direction the wind is coming from (at least for that instant in time). Golfers just grab a few blades of grass and toss it in the air.

Both tactics indicate current conditions, much like a weather rock.

Indicators are critical to your business just like the dashboard lights are to your car’s health.

That temperature indicator on your dash, in some circles called an “idiot light”, might light up to tell you the engine is overheating. It might not say that your antifreeze is way past its prime, your radiator is clogged, hoses are leaking, your air-cooled VW bug is out of oil , your head gasket is toast or any number of other things that make an engine overheat.

I read an article this week about a brilliant indicator used by Van Halen frontman David Lee Roth. Often perceived as a strutting, spandex-clad prettyboy with an amazing multi-octave voice, it turns out Roth was the operations whiz of the group.

Deep in an inches-thick contract specifying everything from how many hotel rooms to reserve to the voltage and number of outlets on stage, Roth included a clause mandating that a bowl of M&M candy should be provided and that no brown M&Ms should be in the bowl.

For some bands, it might be just another silly request to see what they can get away with. In Roth’s case, the bowl was an indicator of the quality of the job the event producers were doing.

If the bowl was present and no brown candy was included, it was an indicator that someone had read the entire contract, took it seriously and paid attention to even the smallest details. If he found no bowl (or he found brown M&Ms), Roth had reason to suspect that the contract hadn’t been read and followed to the letter.

For him, that meant that the specification of a myriad of electrical supply lines and outlets needed in specific places at specific loads might also have been ignored. At best, a poor electrical setup might impact the quality of the show. As the severity increases, equipment damage or fires could result.

Either way, it would have been easy for Roth to view that as a risk to long-term music/ticket/gear sales, notwithstanding the danger issues.

The M&Ms were an idiot light to tell him that a careful concert facility setup check was required.

I’ve told you before about the ball of paper I use at hiring time to indicate self-motivated, observant folks from those who might not be.

If you pick it up or ask me about it, cool. If not, I’ll start to wonder if you pick up your socks. The reality is, it indicates whether you’ll notice that the back door is unlocked at closing time, or that the register is open when it shouldn’t be.

Finally, that ball of paper and what happens to it tells me whether or not I need to take the conversation deeper where it comes to self-motivation.

Another indicator is lighting up all around me and it’s more worrisome than a dashboard light or a ball of paper on the floor: It’s the caveman thing.

At a time when creativity and innovation (much less shredding of the box you need to get outside of) are as in demand as ever, I see folks retreating to their cave to hunker down until someone comes by and tells them that it’s ok to come out.

I also see folks looking at things the same way they got looked at them 30 years ago.

An example: A firm needs a TON of funding to pull off a project. It’s a project that will grant them independence and perhaps a competitive edge that puts them 4-5 years ahead of everyone else, while protecting them from regulatory issues and commodity sourcing problems *for decades*.

So far, approaching a bank seems like the only choice.

Funding enterprise-class expenses is beyond going to the bank these days. Partnering with vendors and (oh my, dare you consider it) competitors, public-private orgs, local equity partners, angels, heck – even 10000 community members. If you look hard enough, there are many, many ways to build a pile of funds if you just gotta have them.

Ask yourself a few questions when pondering whatever is lighting up your dashboard:

2 replies on “What’s lighting up your dashboard?”

Excellent post. I like the analogies and I never would have guessed David Lee Roth was the brains.