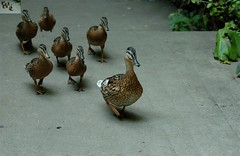 Year after year, I’m fortunate to have the opportunity to watch young men turn from “typical 5th graders” into amazing young adult leaders. Because of that, examples of youth leadership in the news tend to get my attention.

Here’s a study in contrasts of leadership and character from two young ladies:

Earlier this week,Â actress Lindsay Lohan decided to sue E-Trade because they had the nerve to name a character with the same first name as hers in one of their baby commercials – and the baby just happened to be a “milkaholic”.

Lohan claims that the “milkaholic” baby was a jab at her substance abuse problems.Â Maybe it was and maybe there’s a lesson there about public figures, leadership, role models and so on. Just maybe.

An enterprising person or their agent might have contacted the California Milk Processor Board in order to leverage the alleged characterization into a fun, and probably popular, commercial for their “Got Milk?” campaign. But that didn’t happen. Too busy calling the lawyers to see a good opportunity, perhaps.

The shiny side of the coin

Later in the week, a client sent me a link to a leadership post about Megan, who convinced her big-time CEO dad that he needed to keep a commitment to run in a half-marathon, despite having a seriously overscheduled, busy executroid week.

Megan’s clearly a fine example of the ability of young people to lead. Her email was classic, post-on-the-wall stuff that every leader should read, file away and pull out once a month to review – just in case.

Now…think about your day. What example are you setting for the people around you?

One reply on “Two young ladies: A contrast in character and leadership”

Great food for thought. It is important to see yourself outside of your skin so-to-speak. It is important to know the type of influence you have, whether it be at work or at home, and make sure you act accordingly (optimially being a good all-around person at all times). As for Lindsay Lohan, I hope the judge laughs at her case.
.-= Adult diapersÂ´s last blog ..Home Blood Pressure Monitors – Wholesale Point =-.