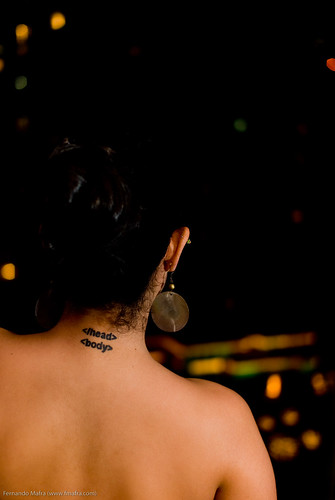 If you’ve been reading what’s going on in the economy, it seems like a fair percentage of the new jobs that are still out there are going to technical people.

Even today in Silicon Valley, the number of applicants in the job pool for a specific skill are roughly equal to the number of open jobs in that niche.

Meanwhile, local employers here in Montana are telling me they get 100-300 resumes/applications for every open job they post – which isn’t too many right now.

Every day, more and more jobs involve technical knowledge.Â Even tattoos are technical these days, as evidenced by the inkÂ on this girl’s neck.

When I say “technical people”, I mean programmers, engineers and similar folks.

While some of the work these folks do can be outsourced, the work that isn’t tends to require local cultural context that isn’t often available to the technical person in another country.

Cultural context means a knowledge of the culture of the target market for the product you’re designing. Some products require it, some do not.

For example, an electrical engineer in almost any country or region of the world can design a cell phone component because “everyone” knows what a cell phone is and how it’s used.

The same isn’t always true when the design target is something in the cultural context of a particular area.

If you are in the U.S. or Canada, would you know the important aspects of designing a motorized trike designed for the streets of Delhi or Shanghai?Â Probably not,Â unless you have traveled extensively and spent time in those places.

Not all jobs require that context. Quite often, whenÂ you look at the jobs that have been outsourced, you’ll find that those jobs were lost because those jobs *can* be outsourced.

That doesn’t mean they aren’t technical. It simply means that they are technical but anyone with the skills can perform them – no matter what culture they grew up in.

Lots of people get really angry about that, just like they got angry at steam engines, the cotton gin and other advances that changed how our economy works. Meanwhile, that outsourced job went to some guy in somewhere who’s trying to feed his kids like everyone else. He might be making $1.10 a day doing that work, but it could be twice his previous pay.

Regardless of what the pay is, that’s a job that COULD be outsourced. Technical or not, it’s too general.

I received this (redacted) email from a friend today who has forgotten more enterprise network stuff than I’ll ever know.

So now I have another big contract.

These guys build big infrastructure for municipalities and large facilities. Perfect shovel ready stuff for millions of dollars and several years putting America back to work.

My job …. getting a working solution that allows them to move the technical work to a big city outside the US. Seems those folk need the work a LOT more than their counterparts who happen to be in, of all places, a city here in the US).

This is not the first time I have had a project where the purpose was to move American jobs overseas but it sucks more and more each time.

Add the that the fact that the Sr. Management team for this company is amazingly draconian with amazing bad morale and it proves that some people truly have just about sold out to the highest bidder.

The technical work being outsourced here is highly technical, but it is also generalized. It hasÂ no local context that matters, has nothing substantial to differentiate it, nothing to keep the work from being done elsewhere, whether elsewhere is Kansas or Kazakhstan.

What if you aren’t “technical” in the context I’ve described here? Let’s say you’re a cabinet maker (which to me seems very technical).

Have you made the effort to determine what needs these specialized businesses have? Their success and their specialized needs might fuel yours.

Just an example, but worth some thought and perhaps, some effort.

Not being outsourced is as much your responsibility as anyone’s. Make the effort.

Good post. It is much more difficult to “manage” your career now than it used to be. As you say the risks are great and there are not wonderfully easy places to hide from the risk. There are many jobs that will certainly survive: nurses, car mechanic, plumber… but many can change drastically (and if you don’t change with them you could be in trouble). And many other jobs are difficult to predict. Software developers are doing very well. I think they will continue to. But what many do could also be outsourced. Still the developers that know how to work with the business AND code are at a huge premium and difficult to outsource. It is possible for those types to do that role and then manage remote developers to do the work. That is difficult to do though – but may be the way things go, more and more. Civil engineering is likely to be a good place. Our infrastructure is falling apart, someone needs to access and find solutions. And it is a lot of infrastructure.

Your point about cross-discipline skills is a good one and relates somewhat to the discussion about cultural context. Still, having some business skills to go with the technologist ones is a big help. Thanks for commenting, John.