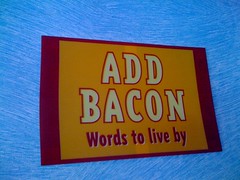 Last week I was at summer camp with the Scout troop so things were a bit quiet here.

Normally I would have posted a series of posts written in advance, but I thought both of us needed a break. Break time is over, so let’s get back at it.

As always, there are lessons in business to bring home from camp, often from unexpected places.

Before I get to that, the story requires a few facts to get you into the proper context:

Now that you are properly educated, here’s the story.

Real Bacon? Are you nuts???

One morning at breakfast, the camp offered bacon to the 200+ campers and staff in attendance.

If you’ve been to Scout summer camp before, you know this is rare because of the expense and because it is difficult to cook bacon for 200+ people while having it anywhere close to hot when served and most importantly – in that situation, it is rarely cooked right.

Typically you find summer camp bacon limp and undercooked or charred and/or some combination of both – sometimes with all those conditions occurring on the same piece (again, not kidding – would I kid about bacon?).

Add to that, summer camp bacon is not normally what Mom and Dad would serve, instead it’s often some tiny strip of paper-thin re-cooked bacon. Pfft.

As folks head through the line on this fine morning, people are seen coming back to their seats with 3 strips of bacon – a rather unheard of serving size at summer camp.

Not only are they giving out 3 strips, but these strips are monstrous (OK, maybe they’re normal – but that’s shocking enough) *and* they are perfectly cooked.

Then the worst happens: They run out of bacon.

Folks, this is like running out of beer and pork products at an LSU home football game. Riots are possible.

At our table, the event already has a name: “The Great Bacon Fiasco”. And you thought I wasn’t kidding about Scouts taking bacon seriously…

People are coming back to their seats with zero bacon and they are watching someone at the next table munch gleefully on 3 strips of porcine heaven.

Apparently some miscommunication occurred with the servers, who gave out 3 strips vs 2, thereby blowing the bacon budget.

The only thing stopping the second coming of the South Central Riots is that the head chef can be seen (through the service window) at the back of the kitchen where she has the entire griddle covered with cooking bacon.

Calmer heads prevail and eventually, 2 strip servings begin to go out to those who were previously left out.

Naturally, those in the Two Strip Club are grumbling – mostly because they know those other lucky dudes got 3 pieces.

Not long after everyone is served, the crazy dude announcing the meal (trust me, gotta be there) announces that seconds will be served and he goes around table by table releasing folks to the seconds line so they can “get their pork on”.

Upon returning from the seconds line, my senior patrol leader (ie: the youth in charge of the troop) sits down with 1 strip of bacon. Perfectly cooked, but terribly lonesome. Everyone who went up for seconds got 1 more slice – which makes perfect sense so that the maximum number of people get seconds.

Problem is, a kid who would normally be happy to have received a 3rd, perfectly-cooked strip of bacon is instead mildly annoyed, or disappointed, or something along those lines.

His bacon-inspired wisdom: He remarks that everyone who only got 2 strips would be far less grumpy if they had given everyone 2 strips from the outset and then given out that same 1 strip second serving to anyone who wanted seconds.

Wiser than his years might reveal, the young man understands how setting expectations works – whether it’s with bacon, product delivery, service, follow up or what not.

What kind of expectations does your business set? Do they meet or exceed what is delivered?Â  Would altering one impact the reception of the other?

This is indeed a good lesson to learn from the bacon fiasco. Setting and managing the expectations of your clients/customers can really mean the difference between a satisfied client and a lost client. My approach is usually to describe everything in detail to the client right from the beginning, and to make sure s/he understands what kinds of results to reasonably expect.