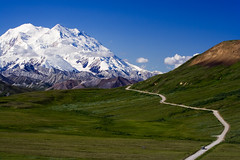 Something amazing happened to me during my trip to Vegas late last month: An airline exceeded my expectations.

“Exceeded” is a bit of a misnomer because my expectations are so low with airlines in general, but the fact is that they treated me like I would expect to be treated.

I was flying Alaska Airlines from Vegas to Seattle and we had a terrible headwind that made us 45 minutes late.Â  Normally, I wouldn’t care but I had a 55 minute layover and had to change terminals.

After waiting an interminable amount of time for the late plane to unload, bypassing every restroom in the airport (time’s a wasting) as I ran through the airport like OJ (hey – it was running like OJ to me) to barely make the little automated tram to the next terminal, then doing the OJ again from the tram to my gate…I arrived.

Most of the lights in the terminal where I ended up were out as all the other gates were closed. When I finally arrived, there were two people in that part of the terminal: Me and the Alaska gate agent.

She waved me toward the open gate exit and said “We’d almost given up on you.”

No matter what it was, it would have been easy to let that plane go.

The agent could have called it a night – it was quite clear that they were done for the day – it was after 9pm in this very sleepy corner of SeaTac.

But she didn’t. I doubt she held that plane because of an extensive management training course. If I had to guess, I’d say she’s simply the right kind of person for that job.

What do you do to figure out whether someone is the right kind of person for a customer-facing job?