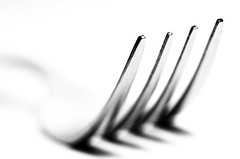 Trump surely came to a fork in the road during last night’s final episode of The Celebrity Apprentice.

A Morton’s fork to be exact. A Morton’s Fork is a situation where you have no good choices – but you have to make one anyway.

I don’t do much reality TV, but I do use the DVR to record the shows that contain instructive moments that I can pass along here, in the print newsletter and elsewhere.

The Apprentice and The Celebrity Apprentice are two such shows. In every episode there is at least one useful observation that can be made, so there is almost always value enough to sacrifice 40 minutes of your life (assuming that you fast forward through the commercials on your DVR).

Not your normal Apprentice

This season has been painful to watch, even on the DVR.

The sometimes-ugly, always vocal victimhood dynamics of Joan Rivers and her daughter Melissa vs. some members of the rest of the team combined with the feisty gamesmanship that Annie Duke displayed were an interesting combination. Include the alcoholic situation with Rodman and the surprisingly spineless Jesse James (both of whom have a lot more under the hood – but failed to show it) and you end up with more entertainment than education.

Frankly, it started to approach the level of the intentional drama that other reality shows create and move away as a source of takeaways for business owners. I know that isn’t the reason for the show, but it’s why I even bother to watch it.

However there was a gem that paid off all season long and it should have been obvious:

This season was a lesson in leadership (or the lack thereof).

Here’s just a sample of the things that project leaders had to deal with:

Annie get your gun

I will say this: If I have to send someone else into a room where only one will come out alive (business-wise), Annie Duke would be on the short list on one condition: If and only if I don’t ever have any concerns about the present or future consequences of her actions in that room.

No question she is a very sharp cookie.Â  But that isn’t enough.

She clearly is one of the best game players (duh) the Apprentice has ever seen.

But would you trust her with your back turned? Something in the back of my mind says no and that alone is enough to get counted out in my book if I’m choosing someone to represent me.

Cry me a Rivers

As for Joan, she displayed amazing tenacity. I seriously doubt anyone expected the 75 year old comedienne to make it to the final.

However, her outbursts – including that Hitler thing – were simply unacceptable. Duke nailed it in the final discussion when she more or less accused Trump of allowing behavior (from both Joan and Melissa Rivers) that would get you kicked out of any Fortune 500 business.

Problem is, she failed to note that she would’ve earned a pink slip as well for her behavior.

I suspect this is where Trump found himself.

I found it a disappointing class to choose from from the outset and I wonder if that’s where he was as well.

Based on his long history of entrepreneurial business success elsewhere, I expected Jesse James to clean house.

Instead, it was as if he had a victim mentality during much of the show. He not only looked the part of the underdog, he lived it. I wonder if he really knew what he was getting into and just coasted until he was gone because it wasn’t his cup of tea.

Regardless of the reason, that was really disappointing.

If I’m Trump and I’m trying to choose between Rivers and Duke, I have to ask myself: who do I want to represent the Trump name?

Who do I want representing Trump in boardroom discussions?

Who in the room consistently exhibits the cool professionalism AND aggressiveness that is necessary to represent Trump’s business?

None of the above

For me, the answer is none of the above.

There’s not a single person in that boardroom who can hold a candle to previous (regular) Apprentice winners.

I guess The Donald just didn’t figure he could close out the show without naming a winner, which is probably for contractual reasons.

At least there were lots of teachable moments this season. If you cant train your lower management using the examples in this show, you’re missing something.