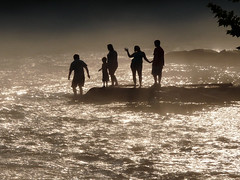 One of the things Scoutmasters teach their Scouts is the Scout motto – “Be Prepared.”

We don’t stand around saying those words all that much (or ever, really).

Depending on their age and their seriousness when I ask the question, I hear answers that include things like:

What it ultimately means to me is being prepared for what life/business serves up, whether it’s a class V rapid, an unexpected flat tire during a snowstorm in a remote area, that five figure invoice that your “customer” still hasn’t paid, the new box store down the street, mention of your business in the Wall Street Journal, by Scoble and on TechCrunch, or stumbling upon an idea that changes your life and/or business.

To someone who has a job, I ask them what they would do if they lost their job today? Are they honing a new or enhanced skill so that they can react quickly to a downturn in what they’ve done for the past 20 years? Do they have a network of people in their current (or desired) line of work that could help them identify opportunities?

To someone who has a business, I might ask them what would happen if the building housing their business burned down, or if their biggest customer stopped buying from them, or if they suddenly got 100 new customers tomorrow.

I don’t ask these questions to embarrass employees or business owners any more than I ask them to embarrass a Scout when asking them what would happen if their friend cut his hand or lost his water bottle on a week-long hike. I ask them so they’ll think about their level of preparedness.

Being prepared isn’t just about having a poncho in case it rains, having backups offsite, and having a marketing plan that never stops finding new customers for you. It’s also about being mentally prepared to deal with what happens next.

Be prepared, not only to take a punch, but to make big leaps when opportunities present themselves.