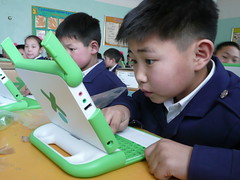 photo credit: One Laptop per Child

One of the things I’m always pushing clients to do is expand their education.

Naturally, that includes the education of their staff, if they have one.

This education expands well beyond your line of business, because there are valuable lessons from every industry.

Likewise, there are processes in almost every industry that you can learn from, modify to fit your needs and thus use in a completely unrelated business.

What I seldom mention is that you can’t let yourself think you’re so smart that you let your guard down.

While it was more than a decade ago, we’ve seen the same sort of situation lately.

While the Fool has a point, neither they nor I would suggest that literacy on any topic is a bad idea. Financial literacy is their reason to exist.

The bad stuff occurs when you stop doing what got you to the point of being literacy, or even highly literate.

Dancing with “who brung ya”

Another thing to watch out for as you educate yourself is that deciding (or just “forgetting”) to stop doing the stuff to communicate, support and enthrall customers.

We’ve talked about lazy and sleepy plenty of times. I won’t belabor them.

When you get too smart… correction, when you THINK you’ve become too smart, bad things are almost certain to start happening. Even worse, if you really think you’re that smart, you might ignore a failure as an aberration rather than you losing your business mojo.

You make assumptions rather than testing the market, your software, your marketing, or that formula for Flubber.

You think that you’re “Too big to fail”.

It’s not worth the time to get smarter if you don’t use what you learn. Think back over your year.

How many things have you done to make your business better? To make yourself better?

Not just reading what will make you better, but DOING it…

Look, even Tom Peters and Dan Kennedy have their bad days. Just the other day, Dan commented in his newsletter (hint…) that he had a bad day because he “only completed 11 of the 12 tasks he’d scheduled for the day.”

He called his day “Unsatisfactory.”

I hold myself to a pretty high standard, and like you, Tom and Dan, I fail myself as well.

Looking at 11 of 12 as unsatisfactory from a “this was my plan, but this is what happened” point of view is what keeps someone as amazingly smart as Dan from getting sleepy about his business.

The gist of the Motley Fool article is this, and I quote:

“In 1998, the hedge fund Long Term Capital Management, staffed thick with Ph.D.s and two Nobel laureates, exploded amid an almost incomprehensible amount of leverage. Behind the failure was raging overconfidence. “The young geniuses from academe felt they could do no wrong,” wrote Roger Lowenstein in the book When Genius Failed.”

Berkshire Hathaway CEO Warren Buffett said this about the firm profiled in the Motley Fool article:

“They probably have as high an average IQ as any sixteen people working together in one business in the country … just an incredible amount of intellect in that group. Now you combine that with the fact that those sixteen had extensive experience in the field they were operating in … in aggregate, the sixteen probably had 350 or 400 years of experience doing exactly what they were doing. And then you throw in the third factor: that most of them had virtually all of their very substantial net worths in the business … And essentially they went broke. That to me is absolutely fascinating.”

The EASY thing to do would be to dismiss anyone who is smart, or trying to get smarter, simply because this group of people royally screwed up. Of course, if you’re the type to think that way, you probably aren’t reading this.

I suggest you re-read that Buffett commet.

A final quote from the Fool article:

Like I said when we got started here…continue to educate yourself.

That *always* includes learning from someone else’s mistakes.