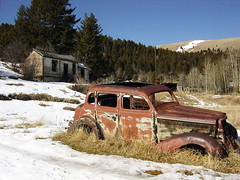 I wonder whose business might be impacted by the CPSIA.Â

I wonder about the nice lady whose son was in my troop years back. She embroiders and sells Columbia Falls Wildcat sweatshirts, tshirts, letter jackets and such – including items for little kids. Fortunately for her, the majority of her business isn’t for kids 12 and under, so she’ll probably be ok. BUT, she may have to replace that revenue stream.Â

I wonder who she buys those kids’ sweatshirts and tshirts from. Maybe a wholesale tshirt and sweatshirt vendor in Minneapolis.Â

I wonder how much of that Minnesotan’s business comes from folks who silkscreen, embroider or otherwise augment those items and then resell them.

I wonder how many of their employees will find new jobs as a result.Â

I wonder how their buying power will change.Â

I wonder if all of those silkscreeners, embroiderers and such are wholesaling their items to someone and if so, IÂ wonder if those retailers have found another source of those items.Â

I wonder about all the small retailers who have tens and hundreds of thousands of dollars invested in now-non-compliant inventory and see that date in February looming.Â Â Not having a CPSIA tag means non-compliant, regardless of content.

I wonder if, after Feb 10 – when no one can legally buy those items – what they’ll do with all that stuff.

I wonder if they’ll sell them anyway and dare the Consumer Product Safety Commission to find, catch and prosecute them.

I wonder how many attorneys will make it big because of this legislation.Â

I wonder how many local tourist shops will have to start buying their tshirts from big out-of-town importers and manufacturers instead of locals.

I wonder what those locals will do for a living if that happens.

I wonder what their bankers will do if the mortgage those locals have goes south.

I wonder if all those Chinese sweatshops have testing vendors lined up. They’ll be happy to make those sweatshirts, tshirts, baby booties, bibs and hand-painted sippy cups to replace the items that used to come from unique local vendors. I mean, come on…there’s nothing more special than a Glacier Park baby bib with a cute little baby moose sewn on it, especially if it was made in Shanghai by some poor schlep making 12 cents a day.Â

I wonder if there are enough thankless low-paying jobs at the local box store to employ these artisans and the others impacted by the closing of those artisans’ businesses.Â

I wonder which Congressional rep and Senator has the most homemade kids product manufacturers in their district.

I wonder if those reps and Senators’ phones have melted. Or if they ring at all.

I wonder… who is the largest retailer of handmade products in the US?

I wonder who is the largest supplier of raw material to the handmade kids product industry?Â

I wonder what these two businesses will be doing in March.

I wonder about the impact on Etsy.com and ebay, which is aching enough as it is.

I wonder if cloth diaper services have to test their diapers.Â

I wonder how many stores that sell beads and other crafty little things like that will have “no kids under 12 allowed” signs on the doors next year.Â

I wonder if all those little “make your own bear/pottery/etc” stores are ready for this.Â

I wonder if you’ll be impacted.Â

I wonder if you’ll call your Congressional Rep and Senators.Â

I wonder if you’ll tell someone about the CPSIA.Â 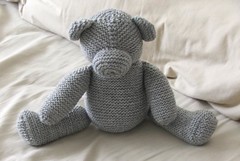 One of these days, my granddaughter would love it if I bought her a little homemade bear like the one in the photo.

Trouble is that after February 9th 2008, it’ll be a violation of Federal law to sell it to me.

Doesn’t matter if it’s sold at a small retailer, a craft fair, a resale shop or in your expensive, high-end, fancy pants, mostly-imported toy store. Bottom line: If you sell or handcraft toys or clothing for kids, it’s entirely possible that you will be out of business as of February 10th 2009.

While it would be easy to dismiss this as me overdosing on too much caffeine, I’m sorry to say that isn’t the problem.

Not only were retailers flush with good retail sales, but the news was full of recalls of defective toys from China and elsewhere – in some cases, toys made in the Chinese plants of American toy “manufacturers”. Lead was a prevalent issue.

These problems angered the nation at large and embarrassed Congress. In those circumstances, its just a matter of time before legislation results.

In this case, the result was the Consumer Product Safety Improvement Act (CPSIA). If you’re a craftsperson who makes toys and kids clothing or a retailer who sells these items, the CPSIA is your Patriot Act and you aren’t the good guy.

This law was so well-favored that when you combine the results of the House and Senate votes on the final legislation, it received only THREE “No” votes.

More presidential candidates MISSED the vote than did those who voted against it.Â

The Consumer Product Safety Improvement Act (CPSIA), passed on July 31 2008 and signed into law by President Bush on August 14 2008. The Act makes it illegal to manufacture or sell toys, clothing and other items for children that do not meet the act’s testing and labeling requirements. The Consumer Product Safety Commission’s budget has been increased by $620 million so they can enforce this law, whose details were largely left up to the commission.

All it would have taken to help small business owners exemption-wise was to include some common sense testing and labeling exemptions for all natural toys and clothing. That would have left a good piece of legislation in place, without threatening a ton of home-based businesses.

Unfortunately the CPSIA contains nothing like that. Work at home folks don’t have a big lobby in Washington. The handcrafted wooden toy crowd has only the newly founded Handmade Toy Alliance, which at last count had fewer than 100 members. As you might suspect, they aren’t a power player in Beltway circles.

The big boys like Mattel, Wal-Mart and Toys-R-Us are substantially impacted by CPSIA, but quite frankly – if they had been better corporate citizens from the outset, we wouldn’t be having this conversation.

Mostly, this is great news for parents trying to find better products for their kids.

There’s always a “but”

Again, there is nothing in the Act that eliminates or alters the testing and labeling requirements for those that use 100% all natural materials during manufacturing. Perhaps that was considered a loophole that was just too big.

Is petroleum a natural substance? If so, then all plastics must be too, right? And why isn’t lead?

Before you go off the deep end about your cousin who chewed on too much lead paint when he was a kid, I have to say that in general, I am a fan of this legislation. It’s the only way to get large importers and offshore manufacturers to get their act together.

Obviously this law was sorely needed to deal with repeated instances of imported items containing lead, small parts on infant toys, much less the weaknesses in our existing regulations.

Objects in your mirror are larger than they appear

If you think a little harder, the target is much bigger than a bunch of craftspeople selling their wares on Etsy.com (link goes to their open letter to the CPSC re: CPSIA), eBay, craft fairs and small local retail shops.

Anyone who sells this stuff has a new cost of doing business to add to their expense list. Anyone who has these items in inventory has to get rid of that inventory by February 10, 2009 (some can wait till August), or pay to have it tested and labeled per CPSIA requirements.

While the large manufacturer suddenly has a substantial new COGS item, it’s the little guy is the one who is going to suffer the most because they simply can’t afford the testing that is required.

For example, there’s a retired lady here in the Flathead Valley who makes little wooden trains in her garage woodshop. She carefully scans paint manufacturer websites and questions their representatives by phone to be sure there’s no lead or other nasties in the paint she uses on her carefully made toys. Her business is history if the CPSIA stands as written.

You might be thinking that you really don’t care. Maybe you don’t have kids or you only buy toys and clothing from major American manufacturers (er, I mean importers). Or maybe you don’t own a store that caters to kids, so why would you care?

It’s time you started caring, but let me help you decide. Here are a few examples of businesses that will be impacted by the CPSIA, otherwise known as “reasons to care”:

If you don’t own a business that has anything to do with kids, don’t think it doesn’t impact you. Think about the owners, employees and family members of the businesses described above. They might not be spending money in your store by the time the CPSIA gets done with them.

What will they buy from you if they are put out of business by this law?Â Are you in line for a bailout?

What do I do next?

First, call your Senators and your Congressional Rep. DO NOT email them. DO NOT fax them. Those things are far too easy to ignore.

Call them and hold their feet to the fire.

Remember that your existing inventory falls under this law, whether you are a retailer or a manufacturer, regardless of size. Some of the regulations kick in later in the year, so I suggest you read this coverage at Fashion Incubator for additional details. Here’s additional info on what must be tested per the CPSIA.

The full text of the law is here: HR 4040 or if you prefer a PDF, here. Check out the CPSIA frequently asked questions (FAQ) list at http://www.cpsc.gov/about/cpsia/faq/105faq.html.

Speaker of the House Nancy Pelosi’s website does a nice job of summarizing this well-intentioned, but incomplete bill.