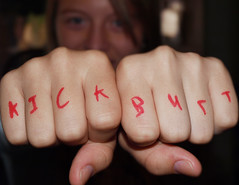 Somewhat annoyed by the “scared” comment, I responded with this:

Annoyed? Sure. Aggravated? Sure.

Thankfully, Brad understood. I say thankfully because I would wonder if he has any business working at the US CoC if he actually *believed* what Scarborough said.

I don’t believe for one minute that an entrepreneur would decide not to start a business because someone in Washington was talking about new taxes.

Do I think new taxes make business people happy? Of course not. But scared? No way.

Hand-wringing by the numbers

What you have to keep in mind when reading Scarborough’s quote is that he is a politician and a TV talking head. My guess is that his speech’s goal is to stir people up about government intervention, regulation, taxation in order to boost TV ratings, get votes or whatever.

Not that there’s anything wrong with that.

Except (and here’s where I can predict the comments) that I really don’t worry about those things on a day to day basis.

Sure, I’m aggravated by higher taxes, especially when they arrive in the same wagon with government waste. And yes, it annoys me when a politician votes for final passage of idiotic legislation and then later speaks as if they are an opponent of the law (eg: Rehberg on the CPSIA is a fine example).

BUT…I don’t sit around wringing my hands about it.

I’ve said it before and I’ll say it again: The best “revenge” is success.

While you might get some satisfaction out of passing your competitor on the street and waving at them from the driver’s seat of your new F350 or 911 Cabriolet, that’s really not what I mean. I don’t mean revenge against them, your favorite tax entity or anyone else in particular.

The real revenge is being successful enough to do *exactly* what you want to do – and none of that has anything to do with fear of what happens in Washington.

If you observe people like Bill Gates (and you should), you’ll find that the big screen movie theater in his home might give him enjoyment, but wiping out polio via his $350MM+ donation to Rotary is what really gets him excited. Likewise his efforts in the sustainable energy business (see more on that at TED.com).

No one – including Bill Gates – likes paying taxes. Like you, he’d rather use that money for something else.

Here’s a suggestion: Worry about making more gross so you have more net than you need.

It isn’t always about that million dollar donation or the new bass boat. Little things mean a lot.

For example, when my Scout troop goes camping once a month, we don’t cook on Friday night. Everyone brings a sandwich or eats before they leave home. We cook Saturday and Sunday.

Before I arrive, I typically buy a footlong sandwich and save half because most trips, one of the guys will have forgotten dinner, gotten it creamed by a wayward backpack, dropped in the mud or some such.

The why and how really doesn’t matter.

While you might consider lecturing the boy on “Be Prepared” (and yes, we will talk), what matters to me is the look on the face of a kid who just got a half a lukewarm meatball sub, when he thought he was going to go to bed hungry because of an accident.

Gates could do the same to Rotary. He could lecture them about what they’ve done wrong in the home stretch of their 25+ year polio battle. Instead, he gave them a pot of money (with conditions) to make it happen and when he saw how they used it, the next pile came without conditions because they had earned his trust.

Trust is a measure of success as well.

Control and the flip side of taxes

I’m sure many will read this wrong, but I’m going to say it anyway: I *want* to pay more taxes (all else being equal) than my competitors, because I want to do more, earn more and create more business for my clients.

The more good you’ve positioned yourself to do (as a business person), the more taxes you’ll pay. Part of that hurts, but it sure beats not paying any because you’re in the red.

If the government puts a regulation in place that impacts one of my clients, I enjoy spending time (and earning fees, of course) helping them profit *despite* the regulation, while their competition sits around and whines about it, writes a letter to the Daily Bugle complaining about it and then fades slowly out of business because they whined rather than working.

The point is that real business people don’t have the luxury of sitting around and hand-wringing (or teeth gnashing) about what Washington DC or Helena are up to – only talking heads like Morning Joe have that luxury.

With very few exceptions, folks in Washington are gonna do what they’re gonna do.

Don’t get me wrong – I strongly believe that you should make every effort to right the wrongs (if not fix them in advance), but that’s isn’t enough. In addition, you’d better be working twice as smart /hard as everyone else in your market in the meantime.

All of the stuff that government does affects us, but we have a lot more control than most of us believe. If our businesses kick butt and take names, the government’s so-called “efforts to scare us” are mostly irrelevant. 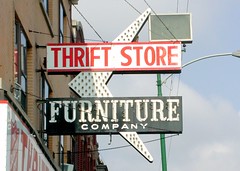 The full press release can be found here, but the operative text is this:

The new law requires that domestic manufacturers and importers certify that childrenâ??s products made after February 10 meet all the new safety standards and the lead ban. Sellers of used childrenâ??s products, such as thrift stores and consignment stores, are not required to certify that those products meet the new lead limits, phthalates standard or new toy standards.

The new safety law does not require resellers to test childrenâ??s products in inventory for compliance with the lead limit before they are sold. However, resellers cannot sell childrenâ??s products that exceed the lead limit and therefore should avoid products that are likely to have lead content, unless they have testing or other information to indicate the products being sold have less than the new limit. Those resellers that do sell products in violation of the new limits could face civil and/or criminal penalties

Make note that thrift stores and resellers are not off the hook entirely, but that common sense changes were made to deal with a real world situation.Â Sort of.

Saying that old items aren’t subject to the law is one thing, until you turn around and say that the lead rules must still be obeyed. No one wants to be feeding kids lead with their Cocoa Krispies, but for once, it’d be nice if the CPSC would talk out of only one side of their mouth at a time.

Keep the pressure on, folks.

We still need to see better handling of the testing requirements for one of a kind (OOAK) and small lot manufacturers. Not to exempt them, simply to make their requirements fit their abilities rather than bankrupting them.

New York state’s legislature recently passed a law declaring that any company with affiliates in New York must collect sales taxes on purchases made in that state, effectively inventing sales tax nexus out of thin air. This was the budget balancing brainchild of now humiliated former Governor Spitzer, and unfortunately, his successor pushed the bill along and got it passed.

Under this law, Amazon or Ebay or whoever must collect and remit sales tax, and file the appropriate paperwork for every sale they make to a New York state resident/business. Given that every town, county and who knows what else has their own little sales tax, keeping track of this and reporting it is a nightmare.

Numerous pundits on the net predicted that companies with affiliate programs would start tossing out all the NY-based affiliates. Some thought those predictions were a joke, but it was clear to me that it made perfect sense. Plus it would be a great way to tell NY where to stuff it.

So this week, Overstock.com became the first (known) major internet commerce site to terminate the contracts of all affiliates in New York State.

The law of unintended consequences is one that misguided legislators cannot help but violate.