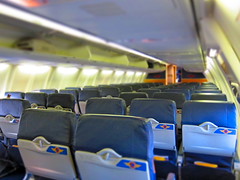 Not long ago, a little boy was murdered.

Soon after, his grandpa was traveling to see his little 3 year old grandson one last time.

He was running for the plane, desperately late despite getting to the airport several hours before departure.

After two hours of standing in line, pleading with TSA officials and airline employees to help him get to his gate on time, his perception was that no one seemed to care how important it was to make that plane.

While the drama takes place in the ticket and security line, the airplane was sitting at the gate.

Anyone who has traveled with and/or read about Southwest knows that one of their top operational priorities is fast turnaround at the airport’s gate.

It’s simple. Planes make money in the air. They don’t make money sitting at the gate.

Southwest takes that to heart. Their focus on at-the-gate efficiency is so well polished that they can turn a plane from arrival to departure in 20 minutes, 2-3 times faster than many competitors.

Every employee is well aware of that focus.

Somehow, someone at the gate found out.

Despite the focus on turnaround and the potential risk to their jobs, the ticketing agent and pilot refused to move the plane away from the gate until the grandpa arrived.

People know to make these kinds of decisions every day, but they often don’t out of fear for their jobs or the specter of “policy”.

The wrong kind of business culture breeds that behavior.

The right kind of business culture empowers their employees to make decisions that are the right ones for the customer at that moment, even if they temporarily fly in the face of business policy or strategic goals. They hire and train with those things in mind.

The agent and pilot knew what should be done and took action.

Who do you think that grandpa and family fly with in the future?

Opportunities to create life-long loyalty are fleeting. Make the most of the ones you get and make sure your people do too.

Especially when it’s the right thing to do.

An additional thought to take away from this: Leverage your strengths.

In a regular air travel column in Conde Nast’s Portfolio called “2B” (referring to a first class seat, whatever that is these days), the column’s author talks about Southwest airlines non-standard (for the airline industry) behavior.

Decades ago, Earl Nightingale said something along the lines of “If you enter a market and don’t know what to do, watch what everyone else does and then do the opposite if you want to be successful.”

He also noted, as has Dan Kennedy, myself and others have repeated and witnessed, that people will stand there and watch you do something different than commonly-accepted industry behavior, become wildly successful at it, and yet, they’ll never bother to change their behavior.

The newsletters I mentioned yesterday are a prime example of it, but that isn’t the subject at hand.

As the author of this column asks rhetorically, “Whatâ??s the airline-industry jargon for unconventional wisdom?” – Southwest Airlines.

Much of what they do is common sense, yet none of the struggling “major” airlines bother to emulate any of their strategies as the slide into the tar pits of their industry.

What are you doing simply because every other business in your industry does so?

Is there a good reason, or are you simply following the Pied Piper?

In any other industry, would people DO those things?

Think about it. If you need some context, ask yourself “What would Southwest do if they bought your business?”