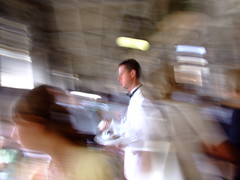 And would they care?

If a long time customer (2 years, 5 years, 25 years, whatever) walked into your business today and all your staff was different from their last visit, would they notice the change?

IE: Buzzwords that answer the question: “Why the heck should I come back?”

Is 2% the only difference between you and them?

If your staff hasn’t taken the steps I described above, wouldn’t it be a lot easier to go elsewhere to save 2%?

How are you insulating yourself from that?

Consider the profitability of the work being done by each member of your staff. Are they making your business more profitable? Or are they doing non-critical work that a computer or service could do?

Why not automate those often lame-but-necessary tasks?

Why? Because you arenâ??t getting it all done otherwise.

Want proof? Call a vendor who performs a service or sells an item that requires installation. More often than not, youâ??ll not find someone who can deliver today, or even this week.

Despite the state of the economy. Or perhaps, because of it.

Odd example: I was told late last week that Amtrak passenger trains are packed to the gills because they don’t have any more passenger cars to put in service. Now donâ??t get me wrong, thatâ??s good thing because it means theyâ??re busy. Busy is good. Means they are doing some things right (and of course that fuel prices are high).

But backlogged and having to force businesses and consumers to go to your competition isnâ??t good, and itâ??s a fine line between busy and too busy.

What’s bad for Amtrak in this case is also bad for you. And that’s where the profitability of the work your staff does will come into play.

On one side of the fine line: things that require your expertise.

On the other: stuff that a high school kid could do in their sleep (and they need more sleep anyhow, right?).

Those are the kinds of things to target for automation.

It isnâ??t about getting rid of people. Itâ??s about giving the people you have the kind of work that generates profit, rather than simply keeping them busy in low-value jobs that take them nowhere.

Why do they want that?

Because the kind of work that generates profit is the kind that makes a job – and thus an employee – more valuable.