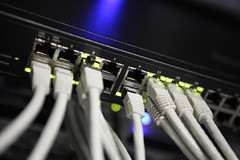 Last month, I bought a Roku XD-S so we could watch Netflix on our TV rather than on a laptop.

It’s a fine unit for streaming Netflix and (probably) Amazon Video-on-Demand, Major League Baseball on demand and so on.

The interface was a little disappointing because I hoped to be able to queue Netflix DVDs from it, but the primary function was streaming and at that it performs quite well.

Trouble is, the Wii that we never use (it was a gift) now plays Netflix as well, so we no longer need the Roku. The last thing we need is another box and more wires under the TV.

So I use the Roku support form on their website to ask for a RMA. I would have called them, but nowhere on their site does it say “DO THIS TO RETURN YOUR UNIT”, despite the lovely graphics saying “30 day unconditional return policy”.

I get transferred overseas, judging from the accent of the very nice man who answers the phone.

While his command of English is an order of magnitude (or several) better than my command of his native tongue, we have accents to deal with. Both of us.

We end up using military phonetics for TWENTY-THREE minutes because we can’t communicate very well, primarily due to our accents.

Shipping your tech support overseas doesn’t bother me, as long as the internal feedback chain remains in place and the customers are served well.

Putting people on the phone who require Hotel Echo Lima Papa (“H E L P”) to be understood (and to understand the caller) does your company a disservice and alienates customers – regardless of what their native tongue might be.

The guy did an admirable job and given our communication issues, showed great patience. Neither of us got angry. I got what I needed.

But 23 minutes to get a RMA because names, email addresses, street addresses and so on have to be communicated in military phonetic alphabet creates a horrid customer experience.

As a small business owner, you probably aren’t even considering moving your customer support overseas. But are you doing something else that creates a customer experience that is this slow and unproductive?

PS: Shortly after the call, I received an email with the details of the RMA, shipment and packing info, etc. We got it right, but the email was a ton faster and crystal clear. The SAME rep could have serviced that request perfectly via email in 2 minutes, rather than spending 23 minutes on the phone.