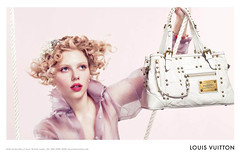 On the BBC television show TopGear, one of the hosts was reviewing a new Audi sports car.

After going on about the car, cooing about its performance and handling, he had to come up with something to say how amazing he felt about it overall.

Keep in mind that despite slowly changing demographics, this is mostly a guy show. It’s about cars, geeky mechanical stuff and perhaps most importantly, stupid projects we build for no apparent reason.

So he said about the car…. “It’s like Scarlett Johansson’s lips.”

He said it much better than just saying “Wow”, or perhaps just by staring “for too long” as if you were hypnotized. I’m guessing that anyone who actually knows who Scarlett is (or at least has seen her photos/movies) knows exactly what he means.

By describing it in that way, he put an exclamation point on it that made it difficult not to want to drive the car.

How do the testimonials your clients give make it difficult not to try your products and services?