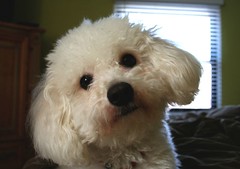 The other day, one of our dogs chased a huge moose out of the yard.

Who cares, right? Maybe. Read on.

If you haven’t ever seen a moose, they aren’t quite as friendly as Bullwinkle. In fact, they have a reputation for being pretty mean once provoked.

Readers of the Gary Paulsen’s Hatchet series will remember a scene where the moose attacks Brian in a high mountain lake, almost drowning him.

If you remember past posts, you might assume that Blondie, our 85lb+ Golden Retriever/Alaskan Husky mix might be the one who chased the would-be Bullwinkle out of the yard. Even though Blondie can fill the back seat of a Suburban, you’d be wrong if you assumed she was the moose chaser.

It’s an understandable assumption. After all, a full-grown moose typically weighs between 800 and 1300 pounds and stands 6-7 feet high at the shoulder. You’d assume it would take a big noisy dog to scare off something that big and that mean, right?

The trouble with that theory is that Blondie is really of the species doggus fireplacus-snoozus, meaning she’d rather lay in front of the fireplace and snooze.

The dog that chased off the moose? Our Bichon Frise, Gigi (no, I didn’t name her<g>). That isn’t her in the photo above, but the dog in that photo looks just like her.

Gigi weighs all of 8-9 lbs and stands maybe 6″ tall at the shoulder. So I’m looking out the bathroom window into the back 40 and I see this little white wanna-be tasmanian devil yapping her brains out and this moose trotting off while looking over its shoulder looking like it wishes it were in another county.

Yeah, there’s a lesson there. You knew it was coming.

Many times, that assumption is made because the competitor is “too big to fail”. Bet you’ve heard that a lot lately.

In the case of the moose, that would be my assumption as well. The likely reality is that the moose realized that this little yappy white critter coming after it with fangs bared and a maniacal yap (is that even possible?<g>) not only wasn’t scared of it, but wasn’t going to back off.

Suddenly, whatever brought the moose into the yard simply wasn’t worth it anymore. Trust me, I have those days with Gigi from time to time myself:)

The dirty little secret is that if the moose got close enough to Gigi, she probably would have run for the hills, but coming to that one particular spot just wasn’t attractive enough for the moose to chance it.

The moose doesn’t know what Gigi is capable of, much less willing to do in order to win the battle. Because it really doesn’t need this little corner of Montana in order to survive, it leaves.

Like Gigi, your ability to compete against a large, entrenched competitor is largely up to what’s inside of you.

Do I mean that you can sell more insulin or diabetic socks than Wal-Mart? Probably not.

On the other hand, in your market, you might be able to create a great success selling diabetic supplies to the right market by selling better than they do – simply because of delivery, service, insurance handling, convenience and so on.

Even Wal-Mart has weaknesses – some by design

Even in a market with a large, entrenched competitor, you’ll find things that your competitor is unable or unwilling to do. Things that the customer would be happy to have you do for them as part and parcel of delivering your product or service. There are *some* customers that will gravitate to you because of that.

Others wont care about delivery, drive-up, or whatever you use to differentiate. Let them go. Assuming that everyone is your ideal customer is a great way to bore the market to death (the death being that of your business).

Focus on the clientele who revels in or depends on the differences you offer.

What would your competitor simply hate to find you doing in “their” market? What could they do if they wanted to that would really please their customer – but they wont because of their compliance department, laziness or their business model?

Be the Gigi of your market. Defend your corner of the yard like a maniacal, fluffy little dog that is convinced it cannot lose.