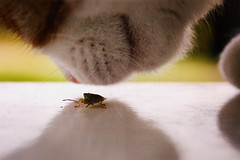 You know the thing I’m talking about. The thing that just wouldn’t go away. It’s so big, you can’t see it.

It’s like that creep at the dance who just wont take no for an answer. Or that thing hanging over your head that you *know* you have to do – but you just can’t seem to get to it.

Maybe because you don’t want to do it, or maybe because those “pesky customers” keep calling or having you run across town doing stuff for them.

So the money is coming in, but there’s that thing you gotta do.

In this case, it’s work that you make for yourself by doing all that stuff you’re doing for clients. So, it’s kind of a good thing, but it’s also stacking up.

Video and still photography are good examples. You go out and capture an event or a portrait or some such and then there’s the studio’s editing station sitting there.

Thousands of frames have to be edited, corrected, cropped and perhaps a few of the images or a few moments of video are turned into amazing artwork.

Hours and gigs of video have to have the sound cleaned up, bad takes removed, frames removed for whatever reason, titles and effects added, and so on.

These tasks are labors of love at times, but at others, they are long hours of brutal grunt work.

How much did you say you make an hour for this work? Is that editing time factored in? (different discussion for a different day)

Editing might be fun when there are a few hundred shots of something you love shooting, like landscapes, sports, portraits or what not.

It might not be as much fun when there are 5000 sit and grin shots of kids or families or what not. Video – same deal.

What if you didn’t have to do it?

Don’t think about the WHO quite yet, but on what you get when you don’t have that work weighing down on you.

It’s the time and what you do with it.

How long after these marathon editing sessions does the “wow, this is gonna take x hours of editing time” thought process start creeping into your shooting?

When shooting something with fast action in it, does this “force” you to dial back from 6.5 frames per second to 3?

Does it enter your mind as you shoot 3000 frames (or 15 hours) of wedding coverage, or some marathon sporting event? Do you eventually get the equation in your head that every x shots = 15 minutes of editing?

Does that put a box around your creativity, even subconsciously?

Eventually, I’m guessing that it will.

At some point, one risk is that this editing work will become mechanical.

If you think about it a bit, how could it not after months, years?

So…if you aren’t doing all that editing….What would you get done instead?

What about the work that you are totally in love with?

Isn’t that really where you want to spend your creative synapse firings? (assuming we all have but so many)

Isn’t that the work you *really* want to spend hours of loving, creative, out of this world editing time?

Just a question. You don’t have to answer.

Let someone else edit my video/photos??? Am I NUTS? Perhaps, but that’s beside the point.

If you aren’t a photographer or videographer, you likely still have something like this on your plate.

Yet you still do it and it’s adding miles/hours between you and amazing.

2 replies on “The thing in the way of amazing”

The thing in the way of amazing [link to post]