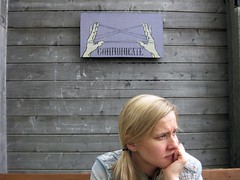 Millions of people depend on Gmail.

Sometimes it goes down unexpectedly.

Not long ago, people all over the world were “freaking out” and saying the F word (“Fail”) because Gmail was down.

In addition to numerous posts via Twitter and other social media, here’s how Google communicated a problem when they had a major downtime (their description – the downtime was not quite 2 hours).

Think about how your business responds when there’s a problem.

Do you keep it under your hat?

Do you update your clientele frequently so they remain calm, even if things aren’t going so well.

When things aren’t going so hot, it quite often ends up being more important how you communicate with your clientele when there’s a problem.

It got worse for the business because they handled communication poorly.

No reason was given for the sudden interest in track-side land but people started talking. Conspiracy theories were abundant.

Here’s an excerpt from an early newspaper column about BNSF’s behavior:

Burlington Northern Sante Fe is up to something. The railroad giant has approached property owners in Whitefish and Somers, offering to buy their land. No one knows why, exactly, not even those who have been asked to sell. And BNSF isnâ??t talking â?? leaving entire neighborhoods apprehensive…

Eventually, residents got wind of BNSF approaching their neighbors and started asking questions. BNSF was mum about it, not even talking details with those they offered to buy out.

As a result, the residents made the natural move – they got attorneys.

Feeling the heat, BNSF decided to admit what was going on, albeit a bit too late to avoid looking a bit slimy.

By then, the tone had been set. Lying until you get caught is how things were gonna work, even if they were “only” lies of omission.

Coming clean only works in your favor when you do it upfront.

Not unlike W.R. Grace’s behavior in Libby MT (which echoed its earlier behavior in Woburn MA including lying to the EPA about their chemical use), BNSF had set the stage such that nothing they said was going to be trusted.

Before long, the EPA got involved and now BNSF has to do things the hard and likely more expensive way. Just like Grace, at least in Woburn.

While the BNSF and Grace situations are substantially more serious than a mere 100 minutes of Gmail downtime, that really isn’t the point.

1 reply on “Earn trust or destroy it? Your choice”